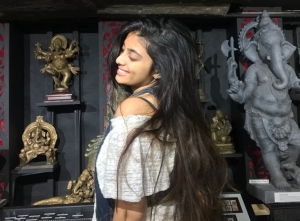 Julia’s personal experience growing up in New York City was the catalyst for the museum’s establishment. She said: “Sometimes strangers would say, ‘You must be from India.’ But I tell them I’m not, and explain that I’m Sri Lankan. And then, over and over, I would get the question ‘Where is Sri Lanka?’ With the establishment of my museum, I want to change that.”

This is wonderful in and of itself. But what makes this museum truly unique is that Julia is a 19-year-old college student committed to sharing the history and culture of Sri Lanka and her family’s heritage. I think she’s a phenomenal example of cultural leadership and creating opportunities to build community through the establishment of an institution that will foster understanding for generations to come. I began my dialogue with Julia by asking her about the genesis of the museum.

Donna Walker-Kuhne: What led to the development of the Sri Lankan Museum?

Julia Wijesinghe: When I was 15 years-old, I told my parents I wanted to open a Sri Lankan museum. It was the result of a dream I had growing up and also going on a field trip to the Museum of Modern Art (MoMA).

I attended an all-girl, Catholic school in Queens, New York. I was in a bubble because I was shy in front of people. In my Sri Lankan community people are shy and try to act like Americans, which is OK. But I personally believe everyone has a moment when they recognize that they are different, and it is important to be who you are. Being the only Buddhist at a Catholic school taught me what it’s like to feel and live with that difference. It also propelled me to no longer be shy; to speak out, which helps me now with public speaking.

I also realized that despite the amazing diversity of New York City, most people thought we didn’t have any Sri Lankan identity or traditions. I knew that wasn’t true—we speak Sinhalese (one of the Sri Lankan languages) at home and we celebrate our traditions. I wanted to open the museum to expose young children to my culture and show it to the world to dispel the myths and stereotypes, such as thinking that Sri Lankans and Indians are the same people. It’s a different country and a different culture, despite some similar religious and cultural traditions.

I felt strongly that I didn’t want to be categorized or labeled as something that I am not. I also wanted to honor and represent my parents’ home country. I have been traveling to Sri Lanka every year since birth and I always learn something new. I wanted to share what I was learning with others.

My father challenged me at 15 to make plans for the museum and not to depend on other people. He said I would have to do it myself. Then my parents also told me I had to wait until I was 18 to open the museum. So, after three years of having this vision, this dream, I opened the museum’s doors in March 2017. My father provided the initial financial support, which allowed me to ship cultural artifacts to New York from Sri Lanka, and he has entrusted me to make good business decisions.

Donna: Why do you feel sharing Sri Lankan culture is important?

Julia: Ethnic pride, educate others about Sri Lanka, and helping people distinguish between all of the South Asia cultures. More specifically, I wanted to respect the country of my parents’ birth and honorably represent them. It’s important to me not to be shy about my culture, and not to try to be someone else.

Culture is a thing of beauty; it highlights both similarities and differences. It’s important to build conversations around culture, which leads to friendships and unity.

Donna: Tell me about the museum.

Julia: We are only open on Saturdays and Sundays. That’s because I am a full-time student at the College of Staten Island and I am the only staff person. I provide a tour of the museum to everyone who comes. I want everyone to learn about my culture, especially children, so that they are aware and comfortable with differences and similarities. Giving tours also helps me connect to other people.

I recently was interviewed by NBC, and people from other cultures commented about the interview. They said they felt connected to me because their lives are similar. That’s the positive thing that happens when we share cultures.

The museum currently is located in the basement of my parents’ restaurant, Lakruwana, on Staten Island. It includes both replicas and originals of Buddha statues, musical instruments, ceremonial weapons, cooking implements, objects from Buddhist temples, a rubber-tree log, Ceylon tea, my grandmother’s sitar, gemstones, and statues of Hindu deities, such as Krishna and Ganesh.

One other thing is important—all of the museum’s proceeds benefit my father’s foundation—The Lakruwana Foundation. The foundation provides money for children and schools in Sri Lanka. My dad is in the arts and has participated in a lot of Sri Lankan community activities. I am an only child and I am very close to my parents. I am especially influenced by my father’s dedication to community engagement.

Donna: What type of reaction or support have you received from the community?

Julia: The museum opened up March 27th, and more than 900 people have come to see it. Many of the museum’s patrons come from the restaurant. But there also are college students who are studying different cultures. I haven’t done much PR—first was an interview with The New Yorker Magazine, which generated a lot of interest from other media, and from Sri Lankans. Over the summer, when I went away to Sri Lanka, 70 people traveled there for five weeks, to study and learn.

The positive reaction and support has been such a surprise! I don’t know of anyone else my age running a museum or one that is family-based. I also believe this is the only Sri Lankan museum outside of Sri Lanka. I am proud of all that has been accomplished since the opening nearly nine months ago.

Donna: What are your plans for the future of the museum?

Julia: I plan to move the museum to its own space, across the street from my family’s restaurant. I want to develop a community-based program, that works with young kids and encourages them not to be shy and to be proud of who they are.

I am majoring in computer science at College of Staten Island. I may also study Sri Lankan history, or go there to study. Currently, I’m learning from my dad and mom, who have to translate the written material for me because, although I can speak Sinhalese, I can’t read it.

Most important, I want to build an institution to continue to share our cultural heritage and build on the legacy of my parents.

Donna:  Thank you so much, Julia. You are truly a visionary who took action to build a bridge providing access to the community when you realized that there was a gap of information and resources promoting Sri Lankan cultural heritage and the arts. It also is inspiring how you have managed to take full responsibility for the running of the museum by integrating it into the demanding life of a college student!

I believe we can all learn from Julia’s determination to become a “Cultural Champion,” which led her to carve out space in the vast arts landscape to promote Sri Lankan heritage and identity, and to help children feel free to be themselves. In addition, her example demonstrates why it’s so important to build conversations around shared cultures, which break down barriers and, as Julia said, “leads to friendship and unity.”

We wish you continued success, Julia! And to my readers who live in the New York area, I hope you will soon take a weekend trip to Staten Island, New York to visit the Sri Lankan Museum, which is moving to 61 Canal Street, in January 2018, from its current location in the basement of Lakruwana Restaurant on Bay Street.

"I firmly believe that the arts are the only pure vehicle we have in today's society that cross cultural and ethnic barriers and allow people to transcend their differences."

ARTSReach Conference
State of the Art: Equity, Diversity and Inclusion
Where Are We Now?
March 16, 2020