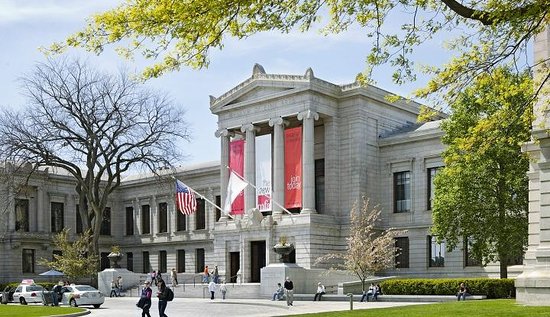 A lot has been going on in the Boston arts community in the months since a group of seventh grade students from Dorchester’s Helen Y. Davis Leadership Academy experienced the “weep and sting” of racism and harassment from museum patrons and staff during a class trip to the Museum of Fine Arts, Boston. As I previously shared in an Arts & Cultural Connections post, the incident received national coverage following a Facebook post by the students’ teacher, Marvalayne Lamy.

In May of this year, the students said they were “welcomed” to the museum by a staff person who told them “no food, no drink, no watermelon.” The students also said they were followed around by security staff and told not to touch artifacts that were being handled by white students from another school—white students who had no security guards following them around. In addition, on two separate occasions, they were subjected to verbal abuse by white patrons of the museum.

Seeing how upset her students were becoming, Ms. Lamy cut the visit short. But before she left the museum, she said she reported the incidents to the museum’s staff. Ms. Lamy told the media the employee she spoke with offered pity and free tickets to bring the students back on another occasion so that they could have a “better experience.”

A public uproar followed Ms. Lamy’s post, and the museum found itself in the spotlight. MFA Boston set up a dedicated page on its website to post and update its actions, as well as its responses to the students’ experience at the museum.

MFA Director Matthew Teitelbaum told the Boston Herald at the time. “These young people left the Museum feeling disrespected, harassed and targeted because of the color of their skin, and that is unacceptable. This is a fundamental problem that we will address as an institution, both with immediate steps and long-term commitments. I am deeply saddened that we’ve taken something away from these students that they will never get back.”

The museum’s executive team set out to be proactive—they launched an internal investigation and revoked the membership of the patrons, who targeted the students. But even after the museum made public its findings, which were widely criticized, the furor has not subsided.

In June, according to a report by WBUR-Boston’s The Artery, representatives of Lawyers for Civil Rights Boston presented the museum with a demand letter on behalf of the students, their parents and teacher due to the “exacerbated trauma and harassment endured by students and teachers via mail and social media in the wake of the May incident.”

The demands, which the lawyers cited as “an effort to repair the public trust,” include a formal apology for the discrimination that occurred; paid summer internships at the museum for the charter school students; lifetime museum memberships for them, their families and school staff; a standing exhibit showcasing the work of local students, and the establishment of a college scholarship fund for students from Davis Leadership Academy.

On its dedicated page in response to the letter from the lawyers, the museum cited its cooperation with Massachusetts “Attorney General Maura Healey in all aspects of her investigation and is also in the midst of an independent external investigation by Casner & Edwards LLP. When both investigations are complete, the MFA will take the appropriate next steps.”

The museum’s statement continued: “Since the school’s visit, and in fact long before, MFA staff and volunteers have been working to examine and improve all aspects of our operation to ensure that everyone feels welcome. We know that we have work to do to achieve that goal, and we are committed to doing so.”

In early September, MFA Boston announced the creation of a new position—Senior Director of Inclusion. Makeeba McCreary, Ed.D. MFA Boston’s chief of learning and community engagement, told The Artery the position had been in the works since she joined the museum staff in early 2019. The job description will be finalized and posted on the museum’s website, and the new director will report to Dr. McCreary.

Next month, the museum is launching a new program for students who visit the museum, with the goal of “developing an environment where all young people trust they will feel safe and celebrated” Posted on its website, the museum notes that the enhancements include “Gallery Hosts,” who are “trained educators who will assist with wayfinding, answer questions and provide connections to the collection,” and handouts for “chaperones and teachers will include a map with key locations throughout the Museum, tips on how to navigate galleries and safeguard works of art, and on-site contacts for assistance, should any be required during visits.”

It is clear that the impact of the students’ negative experience continues to unfold. In the meantime, what can we learn? I believe the insights shared with The Artery by Boston arts leader David Howse, Artistic Director of ArtsEmerson, are instructive for all of us:

“All of us, as arts institutions, as arts and culture institutions, are on a journey,” Mr. Howse is reported to have said. “And I think in our eagerness to get it right, we often overlook the healing that needs to take place and the trust that has to be built.”

I agree. And how is that trust to be built? Through ongoing community engagement—having tough conversations, beginning internally. Listening to and utilizing what we may not want to hear. Demonstrating through our actions that we hear the community and value their input. The most important thing to remember is the tremendous healing force that the arts and culture can be when they are used in service of building bridges, opening doors and welcoming everyone.

"I firmly believe that the arts are the only pure vehicle we have in today's society that cross cultural and ethnic barriers and allow people to transcend their differences."

ARTSReach Conference
State of the Art: Equity, Diversity and Inclusion
Where Are We Now?
March 16, 2020